Life is no Algorithm!

Collective Perspectives Against the Technological Attack

„Once we saturate the matter and energy in the universe with intelligence, it will „wake up,“ be conscious, and sublimely intelligent. That’s about as close to God as I can imagine“. (Ray Kurzweil, Google’s chief engineer)

For many years now, we‘ve been assailed by waves of technological attacks. The goal is to collect more and more data. Google, Facebook and similar companies as well as the „intelligence“ agencies of the world siphon off our data. In the beginning this seemed to be neutral. In favor of electronic money transfer cash is to be abolished to make our economy completely transparent. Sensors for data collection – gadgets as e. g. Google Glass, fitness trackers or smart phones – are gradually closing in on us. The internet of things is a part of this. It turns harmless applications in our homes to spies and informants. Millions will lose their jobs because of what is tagged nicely as „Industry 4.0“. This list could be expanded considerably: genetic engineering, drones, artificial intelligence… Big data is the euphemism used for it. Big theft would be more honest.

Surveillance is a typical instrument of power, control and influence. Today it is also a successful business model which multiplies the number of players. The search for profit is pushing forward surveillance and data collection. They are not just used for implementing control but to predict and specificly manipulate human behavior – a new quality of heteronomy to come.

We* therefore call for participation at the conference „Collective Perspectives Against the Technological Attack“ that will take place in Cologne, Alte Feuerwache, from 30.9.-2.10.2016.

At this conference we do not want to only analyze the alarmingly fast advancing surveillance of our every day life including its economic utilization and its mostly undiscussed methods of control. We want to focus on our options of resistance against the technological attack on our autonomy.

At Silicon Valley, the center of the technological attack on our lives, the strategy to irreversibly change our whole way of living is called „disruptive innovations“: We make products that people can’t live without“. What consequences do these innovations have for gender relations? How do they affect our thoughts and language? Social awareness of the consequences of this dramatic change that includes increased inequalities and dependencies lags that far behind that technocratic players easily can do what they want. At present they do not need to be afraid of our critisism or opposition. We want to change this. This conference will be a part of that.

In the light of experiencing total surveillance and more and more extensive methods of control and manipulation by high-tech companies, pioneers of the internet based on equal participation say: „The net is fucked“. How do we deal with it? Do we just go on and make the net „a little safer“? Or are we able to think of alternatives, to learn techniques to „hack“ technologies and use them against the oppressive totality of the attack on our lives. Is this enough or do we rather have to attack the techno-imperialist ideology of this form of connecting everything with everyone to regain a minimum of autonomy? Refusing to take part in continuously transmitting data and trying to defend ourselves against the digital attack are absolutely necessary but definitely not enough to defy this massive control in the long run. We want to discuss our possibilities of resistance together.

How was it possible that a mass movement in India was able to shut down Facebook’s neo-colonial patronizing small scale internet Free Basics? How does the resistance of those look like that have to carry the burden of our craving for smart phones in the (coltan) mines exploiting rare earths? Is there any resistance at the factories of Foxconn, the world’s largest supplier for electronics? What were the really self-empowering parts the use of social media did play during the Arab spring and how important for the rising dynamics were rallies in the streets after the already stumbling government shut down all communication networks? What are the chances of the struggles against evictions in the world’s „smart cities“?

By answering these questions we automatically cut to the chase. Beyond repressive surveillance and data storage by the state -that also is an issue- we do not have to look far: the technological attack is reaching much deeper into our lives and political controversies than we would like it to.

One example: Since October 2015 the German federal network agency (Bundesnetzagentur) is marking SIM cards owned by refugees with an electronic signature. In cooperation with Europol Facebook and Twitter actively interfere with the attempts of refugees in distress reaching out for people to help them via social media. In Upper Bavaria the town of Altöttingen implemented the Refugee-Card . In a limited area the Refugee-Card, a the „smart“-version of food stamps, allows to buy only certain things. The residual credit can not be saved like money – it will expire on the end of the month.

Another example: in the long term the EU commission wants to abolish cash replacing it with electronic banking systems like credit cards and smart phone apps. All transactions and purchases will be traceable then.

(Health-)insurances want to gain access to these data. In early 2016 first big data apologists proposed the implementation of an universal insurance card to collect these every-day-data. Based in our shopping- and fitness-behavior further information on our life, our health awareness or more likely our willingness to self-optimize will be measured permanently. Everyone’s insurance rate will be be recalculated constantly. That means no less than the final abandoning of the health insurances idea of solidarity, replacing it with the concept of individual failure. Like we experienced it in Germany with the replacement of the welfare and unemployment benefits with „Hartz IV“.

With this conference we want to encourage to be a lot more sensitive and not be as caught by the spell of promises of gaining „comfort“ through „smart“ technologies. We are aware that we are not only confronted with these conditions, we are a part of them, too. By using them we are even part in their reproduction. Knowing our inconsistencies in our every-day-life we want to discuss the relation between enhancements and incapacitation. Ray Kurzweil, god-apprentice and Google’s chief engineer predicted: „At the End of the 2020s we will have fully explored the human brain. That will make it possible to create non-biological systems that will be as complex and as sophisticated as humans – this includes the emotional intelligence as well.“
It’s time to attack these male fantasies and god-complex like the feminist movement in the 1980s did.

To be clear: Our (varying) conceptions of rejection and resistance should not be confused with puristic digital abstinence or the total withdrawal from any social connectivity. It is not the preservation of a nostalgic social cohesion. But the technologies impact towards external control and controllability are well in the focus of our interests! We are looking for ways of self-empowerment by using our critisism of technology practically. With this conference we want to gain confidence to resist these external modes of control:

„(…) So it is not enough to unmask their activities – we have to tear down these secret and intelligence services, we have tear down the street lights like during the French Revolution. You don’t have to be a big ass hacker or high ranking member of the secret service­ with access to sensible information to become a whistle blower. We have to realize what role we are playing in the maintenance of the status quo. We have to find out about our abilities and options. We have to find out what the actual equivalent of Snowdon’s actions are for our own life – and than we will break down the system.“ (JeremyHammond#)

The conference will be mostly in German. Professional interpreting will be provided. If you need another language but English, please contact us beforehand. All the languages we provide will be published on the homepage. For more texts and details about the conference visit:

* We are a self-organized group of different technology-aware people that are holding this conference together with BUKO (Bundeskoordination Internationalismus) .

# Jeremy Hammond – a political activist and hacker – serves currently a ten-year sentence in the US. He did one of the most significant hacks of the last years against the government-related security company Stratfor. We request the release and the impunity of all whistle blowers! 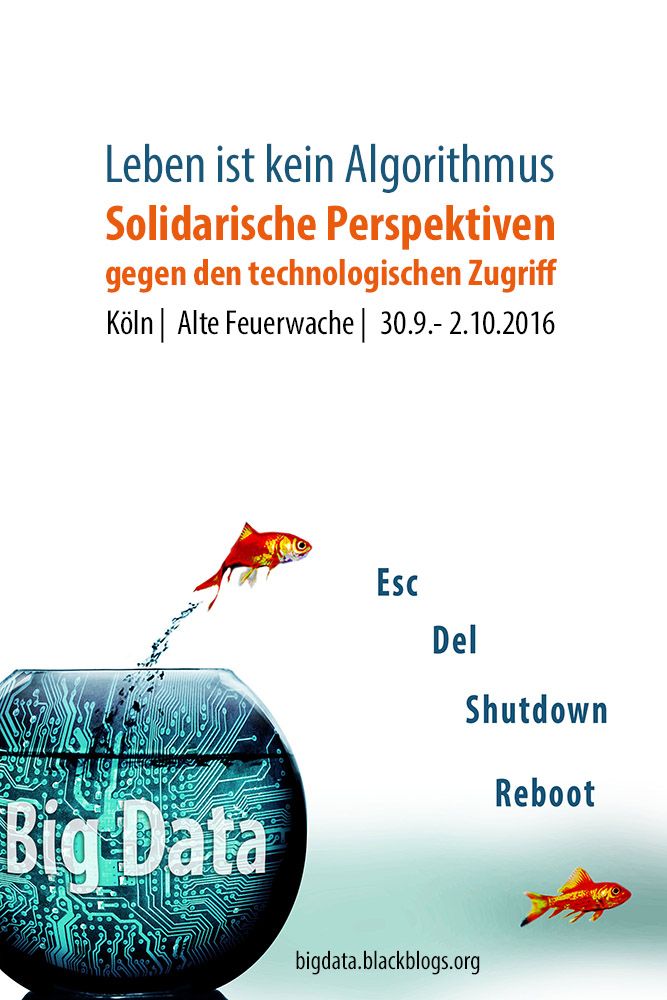